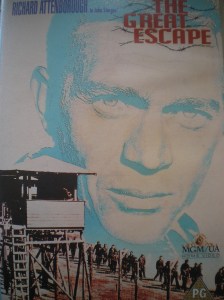 If old soldiers divide into those who never stop talking about the war and those who remain silent, my father, the historian Robert Blake, was definitely in the silent camp. Consequently the story of his escape from a prisoner of war camp in Italy during the Second World War was mainly related to me and my sisters by my mother.  It involved hiding in roofs, a septic or as my mother put it, poisoned toe and most thrilling of all, wolves howling in the mountains.

What could be better!

Of course every child is interested in the possibility of their father being a hero. In ‘Great Escape’ terms I wanted my father to be Steve McQueen’s character, Virgil Hilts, ‘the Cooler King’, the man who wears the sweatshirt and throws the baseball, the man who steals a motorbike and  tries to jump a barbed wire fence. But however hard I tried, I could not transpose my father into Virgil Hilts. He wasn’t brash enough for a start or that reckless. He was much more like the blind forger, Colin Blythe, played by Donald Pleasance; he was highly intelligent, diffident and quite shy.

And unlike Virgil, who is caught and returned to the cooler, and Colin who is gunned down within sight of the Swiss border, my father had managed to escape. Not bad for a modest Englishman, who didn’t like talking about himself very much.

As I grew older, the appeal of Virgil Hilts faded and my assessment of what was heroic became more nuanced. When my father died the only part of his memoirs which he had written was that involving his wartime experiences. The book I am working on now, Far Away, is a work of fiction but it draws heavily on these memoirs and other family papers to tell the story of his escape.

2 thoughts on “A GREAT ESCAPE”