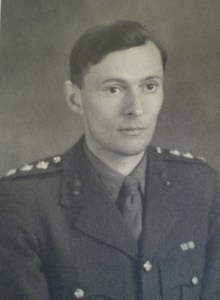 My father, Robert Blake, was one of a group of five men, consisting of Arthur Dodds, George Burnett, Ken Lowe and Beverley Edge, who were involved in an escape from Sulmona POW camp in Italy in September 1943. When Dad wrote his memoirs he relied on the diary of a fellow escapee, Beverley Edge, because as my father wrote on the outside of the copy it was ‘kept at the time and probably the most authentic of all.’ This is a short post on what happened to that diary.

The diary itself was written on a small paper calendar which had been handed out to all POWs in Italy the previous Christmas, prefaced with a goodwill message from Pope Pius II. As Edge comments, ‘No Christmas pudding and turkey!’ He wrote on the few blank pages between the lines of music and hymns and along the margins. The first part of the escape involved hiding in the roof of one of the huts in the camp. At the point where they were about to get down from the roof, Edge began to rip up the diary but then he changed his mind and wedged it between the tiles of the roof and the rafters.

It wasn’t until July 1961 that an attempt was made to find it. Ken Lowe another of the five men wrote to the mayor of Sulmona asking if he might help. The mayor wrote to the Italian War Office in Rome because the camp was still under the administration of the military and Ken was then contacted by an Italian, Colonel Georgio Bonoli, saying that he would try to find it   but that the POW camp had been 75% demolished. Ken and Beverley then sent a plan, marking the hut they thought they had hidden in.

In January 1962 they received from Colonel Bonoli some notes, which had been made by another of their cohort, Arthur Dodds. This meant that the Colonel was looking in the right roof! They wrote to him again and asked if he might investigate further which he did. In July 1962 the diary was handed over to the British military attaché in Rome and in September it was sent back to Ken nineteen years after he had originally written it. It was a little bit nibbled but otherwise in very good condition. They were lucky because the end of the hut they had hidden in made up part of a brick wall which surrounded the camp. So presumably the hut was left standing because if it had been demolished it would have created a hole in this wall.

Far Away by Victoria Blake

If you’re interested in reading a book which is set against the background of escaping POWs in Italy my novel FAR AWAY is available here:

4 thoughts on “RETURN OF A DIARY”