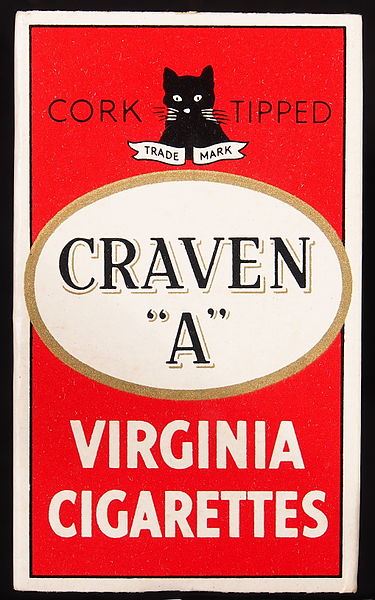 Cigarettes were an important part of the POW camp economy. In the 1940s the link had not yet been made between smoking and lung cancer and it was very unusual for soldiers not to smoke. My father didn’t but that didn’t mean he wasn’t interested in being sent cigarettes because cigarettes were a form of currency.

The aim of the Red Cross was to send each man 50 cigarettes every week. From 1941 to the end of March 1945 the Red Cross sent 6 million ounces of tobacco and almost 1.5 billion cigarettes to Italy and Germany.

As well as these, families and friends could also send cigarettes to POWs using tobacco companies which held special permits. The favourites were Woodbine, Players and Craven A.

Most things could be bought with cigarettes and a sophisticated Exchange and Mart system developed and as the war went on only cigarettes and food held their value. In gambling cigarettes were used as chips. Even the packets were used. They could be turned into packs of cards which were popular because they were easily portable.

If there was no tobacco, dried leaves, coffee grounds, grass and even manure was smoked and the leaves of a Bible or Pears Encyclopaedia were used because they were particularly thin. The aim was to produce something that gave the pretence of a cigarette.

Towards the end of the war when deliveries became more sporadic the value of cigarettes rose. A watch was worth 30 cigarettes, a gold ring 20 cigarettes and a safety razor 1 cigarette.

My father never did smoke cigarettes but he did take pleasure in the odd cigar. There was a phase when an ex-student of his used to supply him with Montecristo Cuban cigars, which he enjoyed very much despite being on the other end of the political spectrum to the Castro regime. The cigars came in wooden boxes which, when empty, were handed over to his children. I loved the smell  and the colourful labels  and used them as  pencil boxes or as a store for marbles.

One thought on “POWS AND CIGARETTES”