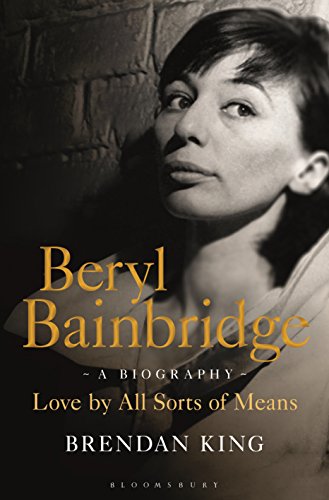 How much does the life of a writer you love interest you? This is what I’ve been wondering as I’ve read the biography of Beryl Bainbridge, Love by All Sorts of Means, by Brendan King. In my case it turns out a great deal. I love her writing and I worked for her publisher Gerald Duckworth for a while. In fact I was working in the warehouse when her book on Scott’s doomed expedition to Antarctica Birthday Boys came in. It was the most copies of one title that I ever packed up and sent out to the bookshops and I particularly liked the photo on the cover of the men wearing  their  big furry mittens.

Brendan King worked for Bainbridge for many years but this is no hagiography. What he delivers here is a measured and psychologically astute  assessment of her and along the way he displays considerable sensitivity to her children, especially with regard to the effects of her drinking and her affairs, those known about and those kept secret (until relatively recently).

Bainbridge was a publicist’s dream. There was the stuffed buffalo in the hall and the hole in the ceiling from when her mother-in-law, Nora, tried to shoot her. There was the shop dummy called Neville that she placed in the window to make people think there was a man in the house. The expression one-off is overused but it seems a more than usually apt description of Bainbridge. She was a genuine eccentric and eccentricity makes good copy. And she was also a fantastic, original writer and the fact that she never won the Booker, despite being nominated five times, seems more and more of a disgrace as each year passes.

If you’re interested to know who the sweet William in  Sweet William was or who the character of Scurra in Every Man For Himself was based on you will find it all here. Along with what made her publisher Colin Haycraft kick the draft of Watson’s Apology across the floor. Interestingly, King suggests that one of the reasons Bainbridge turned to historical fiction and away from writing which mined her own life, was because the complexities of her private life were such that she did not feel she could use that as material in her fiction any more.

In his excellent introduction King is very good on the subject of memory especially when it comes to fiction writers:

“Her interviews and her written memoirs are always brilliant, full of memorable quotes and anecdotes, but that was partly because she was never hampered by the feeling that she had to be literally accurate about the facts when recounting them.”

A polite way of stating that she had no compunction in making things up!

“All memory is fiction, which is why autobiographical accounts and historical ones, for that matter are notoriously inaccurate. We censor memories by recalling only those fragments we wish to remember.”

King’s job as her biographer is sorting the fibs from the facts and he does a very thorough job of it.

There is a lot here which is amusing including an assessment of her by the psychotherapist Charles Rycroft as being, ‘a hysteric with psychopathic tendencies.’

There is also hope for novelists who have been on the receiving end of bad reviews:

“No amount of mannered writing – and there is quite a lot of it – can conceal that Miss Bainbridge hasn’t much to say.” SUNDAY TELEGRAPH on A WEEKEND WITH CLAUDE

To The Hampstead and Highgate Express she stated:

“I’ve got some really terrible reviews, so I’ve just given up reading them.”

And yet she survived and thrived.

After reading this biography I was left with the impression that it is probably best never to trust what comes out of a writer’s mouth about themselves. If you want the truth you’re more likely to get it from their fiction.The act of  writing is exposure enough. When confronted with the perils of publicity what writer isn’t going to reach for the invisibility cloak and puff a bit of smoke in the air or hide behind their stuffed buffalo while pointing at a bullet hole.

Nowadays one wonders if someone like Beryl would have broken through. You can’t imagine her synopsis and three chapters would have made it out of any agent’s slush pile, not with her spelling. King suggests she was probably dyslexic.

Here is one of my favourite examples, a note typed to a friend when she was a bit pissed after a row with one of her lovers.

“I have had a violent argument. Surprise – he takes off his bliddy galoshes and lies down. Alright if he’s paying the bills, but wot a romantic set up, if he is my sooter. I have sed his hair cut is losey . . . andd I will neffer wash his underdrawers, not if he is paralised. He ses I have holes in my jumpers. But I sed I am an orther, and they have holes.”

This book comes highly recommended. It’s well written,  emotionally intelligent and fair minded in dealing with her highly complex private life. I should imagine that it’s going to appear on a great many of the lists suggesting books to buy as presents at Christmas. An extraordinary woman and a magnificent writer, Bainbridge has been well served by this sensitive and entertaining biography. Any writer out there wondering who might write their biography should give King a call. Now I’m off to buy a buffalo.

How about you? Are you interested in the lives of the authors you admire or do you find it an irrelevant and irritating distraction?

9 thoughts on “BERYL BAINBRIDGE: A BIOGRAPHY”