The Vegetarian by Han Kang.

First up The Vegetarian by South Korean writer Han Kang. The structure is a triptych of stories. The first one is written from the point of view of the husband of the woman who becomes the vegetarian. The second from the point of view of her brother-in-law, an artist who becomes obsessed with her, and the final one from the perspective of her sister. On the face of it this is a book about a woman described by her husband as ‘unremarkable in every way’ who decides to give up meat, something which is highly unorthodox in South Korean culture. The consequences of this decision play out in startlingly violent, erotic and destructive ways. The silence or inability of the woman to really explain what she is doing lies at the heart of this mysterious and challenging book. It is clear that she is protesting but the reader is left to decide for themselves what her protest is about.  To my mind her protest is against male violence and control, and  her body is the battleground she chooses for her protest but I suspect there are all sorts of other interpretations you could make. The book has haunted me since I read it and I can’t recommend it highly enough. The translation by Deborah Smith is a thing of beauty. I’m looking forward to reading Han Kang’s most recent book Human Acts which was published at the beginning of the year and has received very good reviews. 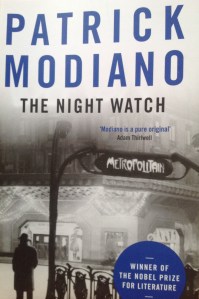 The Night Watch by Patrick Modiano

Next up Patrick Modiano, the French writer  who won The Nobel Prize for Literature in 2014. The two I’ve read are Ring Roads and The Night Watch. Neither are easy reads and I have some sympathy with an Amazon reviewer who said of one of them, ‘I didn’t finish this book because I didn’t really understand what he was going on about.’ The ones I read are published by Bloomsbury and the translation seemed to me clunky. It strikes me that the books could have done with a decent introduction contextualizing the books and giving some explanation as to why Modiano won the prize. To read them ‘cold’ is a bit of a baffling experience. Both books are set during the occupation of France during the Second World War. There is a large cast of characters, black marketeers, spivs, prostitutes, spies and undercover policemen. The atmosphere is dog eat dog. To begin with I found them confusing and slightly dull. It’s hard to distinguish one crook from another and there isn’t much plot as such. My best description is of a Virginia Woolf novel mixed up with a bit of Simenon.

There were however two moments, one in each book, which stood out. SPOILER ALERT. In Ring Roads a father suddenly attempts to kill his son and from that point the book gets a lot more interesting. In The Night Watch a man is in a house that has been abandoned and dresses up in women’s clothes and make up.

“In a trunk she left behind several dresses from Worth. One night I slipped on the most beautiful among them: a peau-de-soie with imitation tulle and garlands of pink convolvulus. I have never been tempted by transvestisism, but in that moment my situation seemed so hopeless and my loneliness so great that I determined to cheer myself up by putting on some nonsensical act.”

I’ve got another one of his books Missing Person published by Godine and Verbamundi and will give that a go. Maybe the translation is better. Maybe Modiano will grow on me. I hope so. If there’s anyone out there who has read him I’d be interested in any recommendations you might have. Do you think he is a writer who I’m likely to enjoy the more I read him or should I give up now? Do you think you have to be French to fully appreciate him?