Off last night to see an evening with John le Carré who has a new book out, A Legacy of Spies, which signals the return of George Smiley, the spymaster who has appeared in many of his novels. Part of the purpose of the evening was to raise funds for Médecin Sans Frontières (MSF – Doctors without Borders), a medical charity which works in war zones, and an organization that le Carré is devoted to. A short film told us that MSF had treated 504,500 men women and children in the crisis in Yemen.

The evening involved several short films in which actors, directors, and screenwriters who have worked on adaptations of le Carré’s books talked about their experiences. The people included Michael Jayston, (Peter Guillam in Tinker Tailor Soldier Spy on TV), Simon Russell Beale who played Smiley in the Radio 4 adaptations of le Carré’s books and Tim Hiddleston and Olivia Colman, who had played characters in TV adaptation of The Night Manager.

Of Smiley, Simon R-B, who has played him most, albeit on radio, described his intense melancholia. Hiddleston commented on Smiley’s quiet heroism. When asked what he might ask Smiley if he came face to face with him Simon R-B said he’d run away from him. He wouldn’t ask him anything because he was so intimidatingly clever.

First le Carré gave an hour long lecture then after an interval he was interviewed by Jon Snow of Channel 4 news and there was a Q&A.

LE CARRÉ ON SMILEY AND A LEGACY OF SPIES

The origins of Smiley was a character called John Bingham who le Carré worked with in section F4 of MI5. This was before he went and worked for MI6, convivially known by MI5 as ‘those shits across the park.’ Bingham had run double agents during the Second World War and posed as a German officer. He was also a thriller writer. From Bingham came some aspects of the physical Smiley – the nakedness of his face when he took off his glasses and the habit he had of polishing his glasses with the end of his tie. Bingham was an aristocrat, an Irish peer, the 7th Baron Clanmorris, and le Carré said that he couldn’t make Smiley an aristocrat, that wouldn’t have done at all, so he made his wife Lady Anne one instead. He said that Bingham was a proxy father figure and mentor to the younger spies in his section.

He went on to discuss the various actors who had played Smiley on film and TV: Rupert Davies, James Mason, Denholm Elliott, Alec Guinness and Gary Oldman. Mason actually played a character called Dobbs in The Deadly Affair (based on the book Call for the Dead) because the Americans did not like the name Smiley. He said that the filming of the character involved a certain personal loss for him of the Smiley of his imagination because the character was made physical but that of course the upside was that his work reached a much wider audience.

One of the things he loved about Guinness’s performance was that the enigma of Smiley was kept in tact for le Carré as well. He told a very funny story about doing a cover shoot for a Sunday magazine cover with Denholm Elliott on the set of A Murder of Quality, which they they were filming in a school. They were standing opposite each other with their noses only a few inches apart while they were being photographed. Elliott repeated range of obscene barrack room jokes throughout the shoot which le Carré ignored. Later Elliott asked him what he was doing on the set and le Carré said, ‘Well, I’m the writer.’ ‘The writer?’ ‘Yes, the writer of the book’, and Elliott said ‘Oh, I thought you were the headmaster.’

At one point they considered Arthur Lowe of Dad’s Army for the part of Smiley and he did a screen test. Le Carré said Lowe did it beautifully but the trouble was that because of the associations they all had with Captain Mainwaring they could not stop laughing when they saw it. He said that Gary Oldman (in the film of TTSS) brought a heterosexual passion to the part. He compared him to Guinness describing the scene where Guinness embraces Lady Anne and saying he could not watch it without shuddering and thinking, ‘Oh, don’t do that Alec.’

At the end he read out an imaginary letter from a Daily Telegraph reader complaining that he couldn’t bring Smiley back because if one stayed true to the books Smiley would be 104 (or thereabouts). He countered this by saying that it was poetic license. Smiley was alive in his imagination and he was alive so why not? Of course his millions of fans will feel exactly the same. 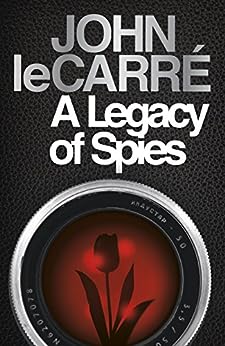 Jon Snow began by asking him about his father. Le Carré had discovered that his father, who was a con-man and a crook, had a Stasi (East German secret service) file and it appeared to indicate that he was an illegal arms dealer. He said that the Stasi had gone to the trouble of sending spies to his father’s office in Jermyn Street and marking where the safe was and also where the telex machine was.

Q. Would you recommend the secret service as a career?

He said if you were good at maths they’d send you to Cheltenham. If you were a seducer, befriender and liar you’d be good for MI6, although in the present climate you should think about the second half of your career/life because you might not have one.

Q. Do you think the US has lost its senses?

He said that what was happening in America was ‘truly, seriously bad’, that the stages Trump was going through – the fake news, and the assaults on the justice system were the same as those during the rise of fascism in the thirties in Japan, Spain and Germany. That kind of behaviour was infectious and toxic and he cited the use of the expression ‘fake news’ by Aung San Suu Kyi in Myanmar in dismissing the reporting on the assaults on the Rohingya muslims who are fleeing into Bangladesh.

Q. Which of your own characters do you most relate to?

He said that was Peter Guillam who works for Smiley and reappears in A Legacy of Spies. JS said I thought so.

Q. Was Graham Greene an influence?

Yes, his early works were. He had read them in his adolescence and that Greene gave a very generous quote for his book The Spy who came in from the Cold. However he said that the big difference between Greene and himself was that Greene had God in his books and there was no God in his own books. He also said that Greene had a dotty political streak and flirted with communism but he said he was hypnotic to meet. Maurice Oldfield head of MI6  said that Greene was a bad spy because he embellished his reports.

Q. On his writing methods.

He talked about the importance of making notes as soon as possible, even when he was drunk. As an example he said on your first day in Moscow what you notice is the smell of Russian petrol by the second day you’ve got used to it and you  won’t register it anymore. He writes long hand. He said this produces a lot of paper and that when the Bodleian Library  (to whom he was giving his paper) came and saw how many there were they had a fit. He starts with very little plot but always has the final frame in his mind and an idea of what he wants the audience to feel at that point. His wife reads what he writes and he is influenced by her response especially if there is a deafening silence. He talked about a mutual understanding between them about his work. He writes every day.

He was asked by Jon Snow about his relationship to MSF and le Carré said that he had been struck by their courage and devotion and Jon Snow said that they were the most trustworthy organization for journalists reporting from war zones.

There was a very poignant moment when le Carré asked Snow how he endured the human suffering he comes across in his reporting. He himself had been very effected by the research he does for his books, especially by seeing the effect of Big Pharma in Kenya and Sudan, the basis of his book The Constant Gardener.

I came away from the event thinking that le Carré is a man who cares passionately about the world. Olivia Colman described him as being, ‘Everything you would hope he would be.’ A beautiful description that rang absolutely true. Peter Straughan who wrote the screenplay for the film of TTSS said le Carré was ‘still an angry young man … like Orwell always in opposition’. Angry certainly but also erudite, charming, witty and with a passionate sense of injustice. He’s certainly not going gentle into that good night. What more could you ask for from a novelist? We are lucky to have him.

I’m off to buy A Legacy of Spies. There are signed first editions in Foyles on the Charing Cross Road but they’ll probably be gone by the time I get there.*

If you want to take a look at the work that MSF do and donate here’s the link: