Evil knitter Number One is definitely Madame Defarge. Here is how Charles Dickens introduces her in A Tale of Two Cities, a book set during the French Revolution.

Photo by Julissa Helmuth on Pexels.com

“Madame Defarge was a stout woman … with a watchful eye that seldom seemed to look at anything, a large hand heavily ringed, a steady face, strong features, and great composure of manner. There was a character about Madame Defarge  from which one might have predicated that she did not often make mistakes against herself in any of the reckonings over which she presided.”

I’m guessing no dropped stitches then. And you see where all that knitting leads to? GREAT COMPOSURE OF MANNER. That’s my aim. Madame Defarge embodies vengeance and the need for revenge. Not qualities you’d necessarily associate with an avid knitter but the cause of her blood thirstiness is that her family has been destroyed by the aristocratic Evrémondes.

“Madame Defarge being sensitive to cold was wrapped in fur, and had a quantity of bright shawl twined about her head, though not to the concealment of her large earrings. Her knitting was before her but she had laid it down to pick her teeth with a toothpick.”

Bloody hell. I can’t say I’ve ever lain down my knitting for a toothpick, a sip from a glass of white wine, would be more like it. But what exactly is Madame Defarge doing as she sits in her husband’s wine shop watching the comings and goings? This is what a spy wonders and is brave enough to ask her. Here is their exchange.

‘You knit with great skill, madame.’

‘I am accustomed to it.’

‘A pretty pattern too.’

”You think so?’ said madame, looking at him with a smile.

‘Decidedly. May one ask what it is for?’*

‘Pastime,’ said madame, still looking at him with a smile while her fingers moved nimbly.

‘That depends. I may find a use for it one day…’

Pastime? What she is actually doing is knitting the names of those she thinks should meet their end under the guillotine’s blade. Knitting as code then. Knitting as a sentence of death. A bit chilling, isn’t it? And the exact opposite of something cosy and domestic. Later on we get this rather nice scene.

“Take you my knitting,” said Madame Defarge, placing it in her lieutenants hands, “and have it ready for me in my usual seat.”

Her usual seat incidentally being near the guillotine where she can watch the heads roll. I don’t know what’s happened to the world but there’s a severe shortage of lieutenants for carrying one’s knitting around at the moment. Can’t find one anywhere. I blame Brexit. Might just have to carry it myself then.

There are three chapters which mention knitting in the book. Chapter 15 KNITTING, Chapter 16 STILL KNITTING, and then the penultimate chapter, KNITTING DONE. The last one, you won’t be surprised to hear, is the one in which Madame Defarge meets her end at the hands of Miss Pross. She does call Miss Pross, ‘Woman imbecile and pig-like’ which is pretty rude all things considered. 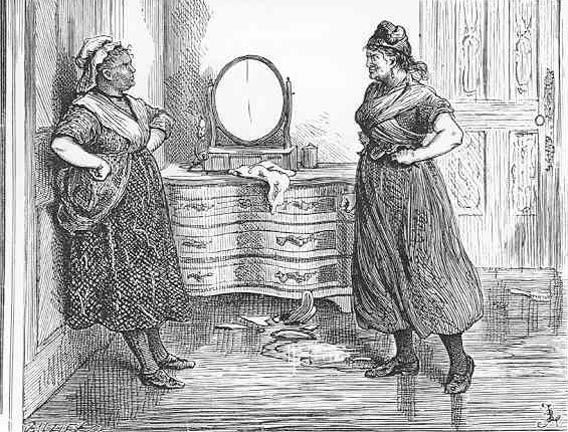 Miss Pross on the left, Madame Defarge on the right.

Finally, here is a fine description of Madame Defarge striding through the streets of Paris. Dickens, it seems to me, is half in love with her, half horrified by her.

“There were many women at that time, upon whom time laid a dreadfully disfiguring hand; but there was not one among them more to be dreaded than this ruthless woman, now taking her way along the streets. Of a strong and fearless character, of shrewd sense and readiness, of great determination, of that kind of beauty which not only seems to impart to its possessor firmness and animosity, but to strike into others an instinctive recognition of those qualities; the troubled times would have heaved her up, under any circumstances. But imbued from her childhood with a brooding sense of wrong, and an inveterate hatred of a class, opportunity had developed her into a tigress. She was absolutely without pity. If she had ever had the virtue in her, it had quite gone out of her.”

So there we have her the pitiless knitter, the tigress, the embodiment of revenge, Madame Defarge. I aspire to all of her skill but none of her vengeance!

* Please note that ‘No you may not’ is a perfectly appropriate reply from any beginner knitter to this footling question.